It is the brew that built the Pyramids and that the ancient Finns considered the drink of the gods. From its origins in the deeps of world prehistory, beer has gone on to fill taps and satisfy thirsts the world over. Many countries today have at least one or two ‘national’ beers which have gone on to international prestige. Japan’s own most famous home brew is the mighty Asahi. It has become one of Japan’s most famous brands overseas and holds the honour of sponsoring the Tokyo 2020 Olympic and Paralympic Games.

If you have spent any time in Japan, you may have discovered to your surprise that the 130 year-old Asahi company makes more than just beer. The Asahi Brewery in Fukuoka is one of 17 Asahi sites across the country that make either beer, wine, whisky and shochu. There’s a good chance that if you’ve said ‘kampai’, you’ve done it with an Asahi drink in your hand.

Those with a taste for the golden nectar in Fukuoka can wend their way in merry pilgrimage to the Asahi Brewery in Takeshita, mere minutes from Hakata station for free tours and tastings all year round. But before you grab your beer money and run to Hakata, would-be tourers of the brewery must make a reservation by telephone. It is a popular tour so the earlier you can book a spot the better. You may get a spot in the same week but it is unlikely you will get one on the same day. Tours run regularly from morning until 3pm. You will be pleased to know that there are also tours in English to make your visit all the more comfortable.

The Asahi Brewery is a strikingly confident-looking piece of architecture. Two large towers in the style of the brewery’s mighty fermentation tanks stand between two shorts wings that push back from the front lawns. Between the towers is a large glasswork of a stylised honeycomb beer hop. The wings are punctuated by long narrow windows which, together with the long vertical lines that link them, create a barley head motif that continues inside on the lift doors and stairways. The straight strong symmetry of the building is at odds with the haphazard jumble of vats and barrels and pipes that breweries are inside. 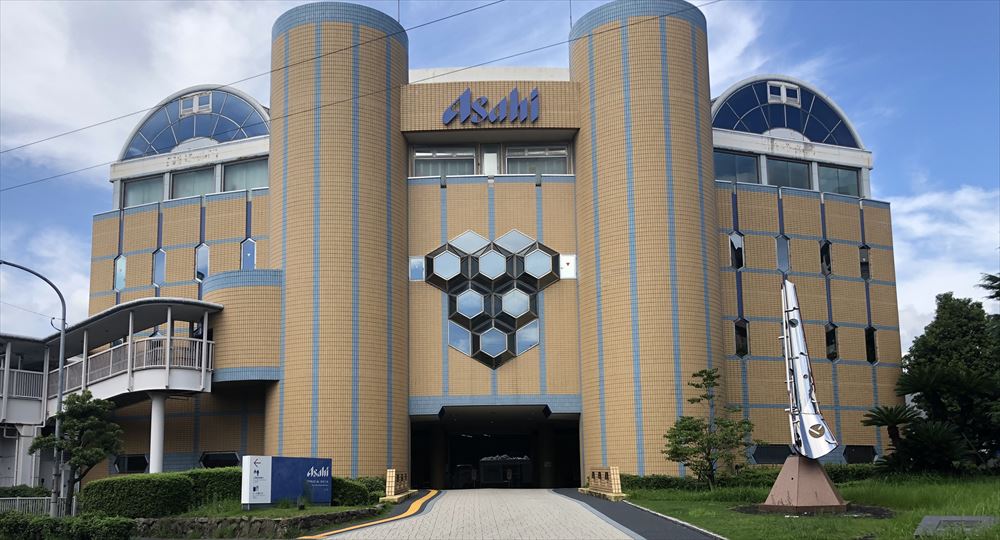 The tour, however, does not begin here so turn your eyes away and follow the signs to the tour reception area on the opposite side of the road. Once you have checked in with the friendly reception staff you can take some pre-tour refreshments with coffee or ice cream while browsing the modest shop. For those hoping for souvenirs, don’t worry as there is another bigger shop at the end of the tour. When the time for tour comes, follow your tour guide. Sadly photography is not allowed during the tour. Not only are there tours in English, but almost all signs and exhibits are in English as well as other languages.

The tour begins with a short film about the goings-on at the Asahi Brewery and the multitudes of people that work around the clock to produce Asahi beer. Once you continue the tour, you will be briefly introduced to the many other Asahi sites in Japan as well as some of the other products Asahi makes including supplements, soft drinks and even baby formula. 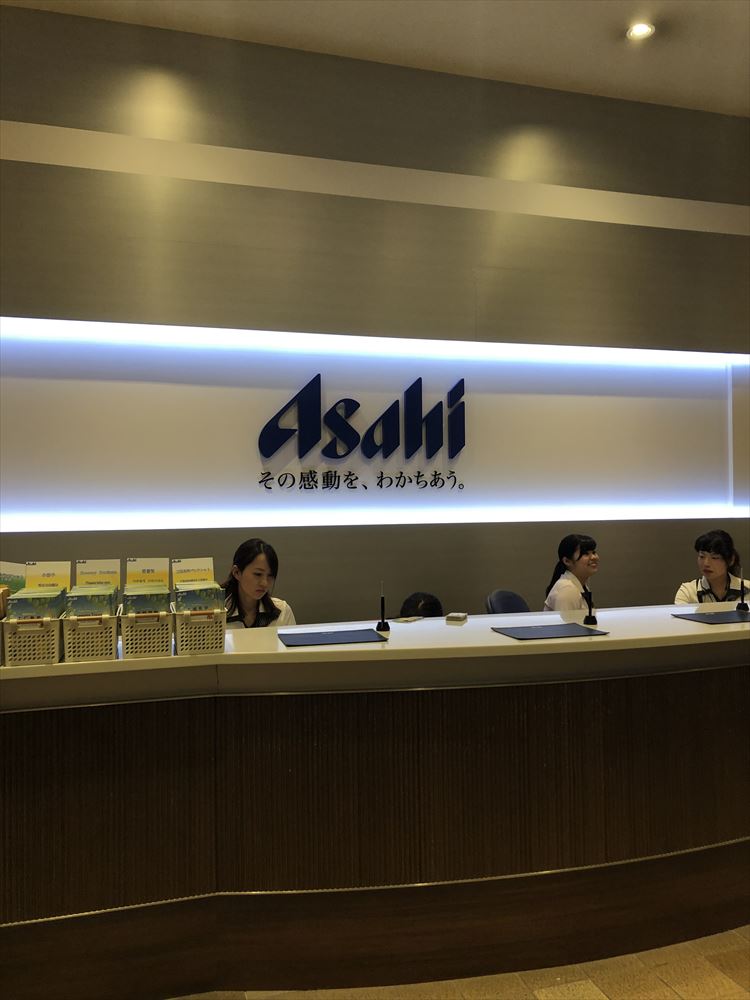 For those eager to get on with the beer part of the tour, you will now have the chance to get your hands on the key ingredients. Visitors can pick up and gently open a sample of the hops and smell that distinctive heady aroma found so strongly in darker ales. There are also malt grains you can touch and even eat to experience the earthy richness which, in ancient times, gave beer the title of ‘liquid bread’. Just these, corn, starch and water go into your glass of Asahi. This sensory part of the tour may give you an extra appreciation for the flavour of the beer later on.

Next is an explanation of how Asahi makes its beer, from mash to packaging. Given Asahi’s huge popularity, it is good that here the tour gives an excellent display of just how they make so much beer. If you are not at all familiar with how beer is made then this is a very opportunity to find out. The displays are bright, clear and modern. There is also some seating here if your feet are beginning to tire. Along the corridors you will walk on the tour are display boards with more about the history of the company and the products. The tour does not stop at these so you may wish to linger a little at these before catching up with the tour group.

Now that the tour has taken you up to Asahi beer being made, we take a long escalator up to look down through vast windows to see the long twisting line of canning, bottling and packaging. This brewery alone can bottle 600 bottles of beer a minute, and there is something satisfyingly therapeutic in watching hundreds of gallons of beer going from open cans to bundled and boxed packs ready to hit the shelves of a shop very near you.

Another long escalator ride back down will lead the tour to its denouement – the part that thirsty throats and happy shoppers will have been waiting for. Enter the shop area and drift to your left to find beer taps waiting to dispense free the freshest Asahi beer for your pleasure. Then take a seat at your table number (you will have received your number at the start of the tour) and let your tastebuds take over. Raise your glass to the Asahi Brewery and all who work in her. You can have up to three glasses of beer including their Super Dry, Super Dry Extra Cold and Asahi Dry Black. Tours later in the day may have a more limited selection due to one of the beers running out. There are non-alcoholic choices for those driving or who do not drink. The shop has a modest selection of Asahi’s beers and spirits and even Asahi beer cake. 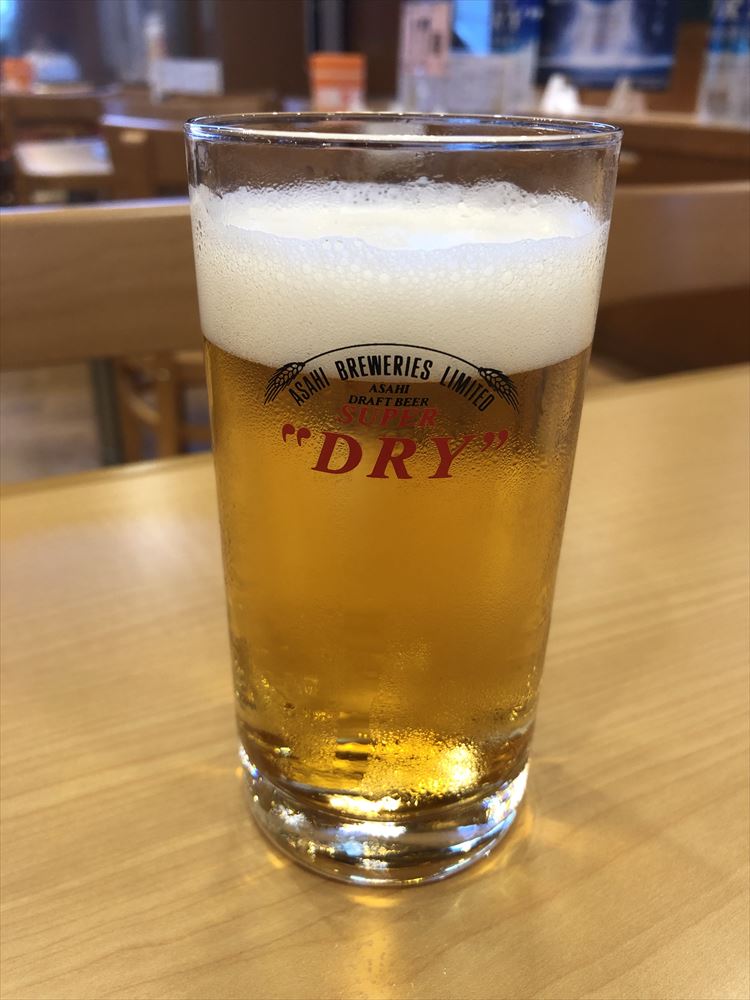 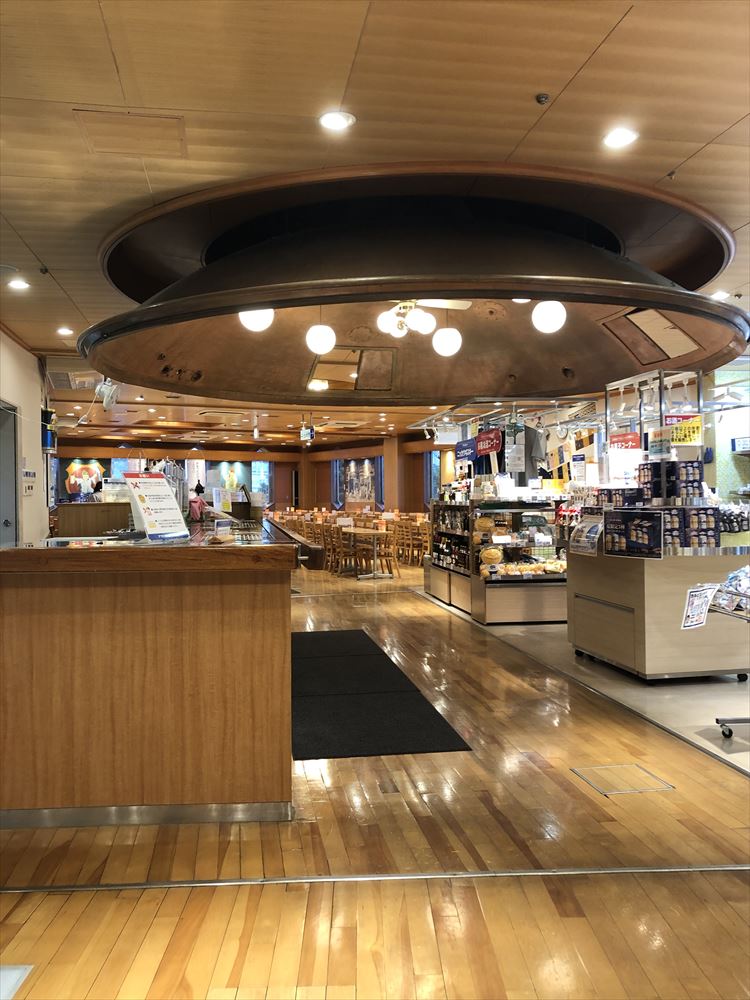 With its short hop from Hakata and taking no more than an hour, your visit to the Asahi Brewery does not take long. It’s an excellent way to while away a free morning or afternoon with time to spare. But you should walk away (if the third beer did not affect your sense of direction) feeling privileged to have gone behind the scenes at what will become the overture of friends bonding, colleagues laughing, memories made and countless dramas across table tops in Japan and beyond. The distinctive brown bottles and silver cans of Asahi beer you saw being born will be the centrepieces of these. And there’s only one thing you can say to that. ‘Cheers!’

Stylish bar with live-hall for parties and single bar hopper ONSA is a place whe... 続きを読む