Let’s go to the Glamorous City of Karatsu!

This time we are going to explain how to get to “Karatsu” (唐津), a city in Saga Prefecture next to Fukuoka Prefecture. It is possible to get there by train or by bus. 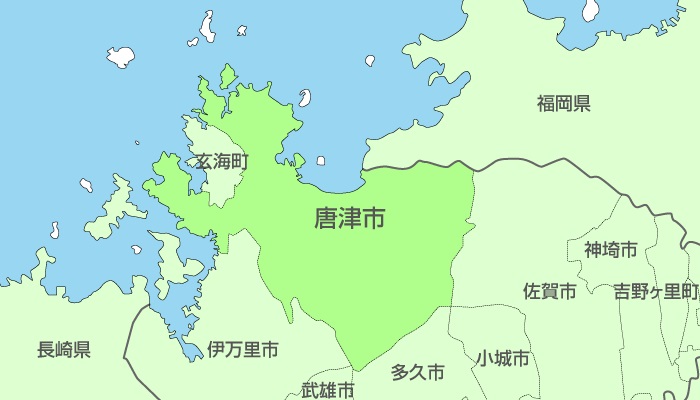 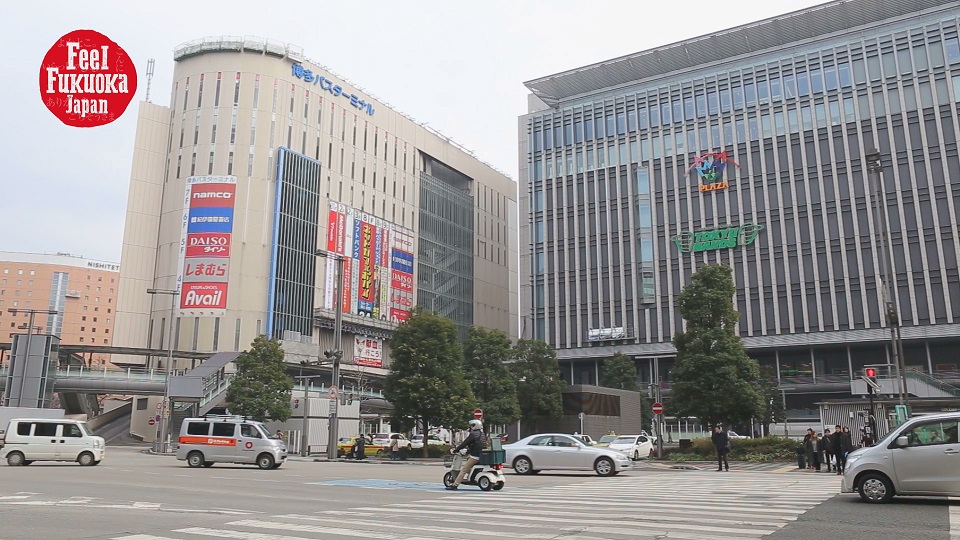 On the 3rd floor of the Hakata Bus terminal next to the Hakata train station, you can buy a ticket bus ticket that will take you straight to Karatsu. A one-way trip ticket costs 1,030yen.

The bus to Karatsu will arrive at the bus terminal number 32. Please check the bus schedule on the on the Showa Bus website

It will take 90 minutes for the bus to reach Karatsu from Hakata. Please disembark at the bus stop, “Arpino Mae” (アルピノ前). You can also take the express bus from the Fukuoka International Airport. 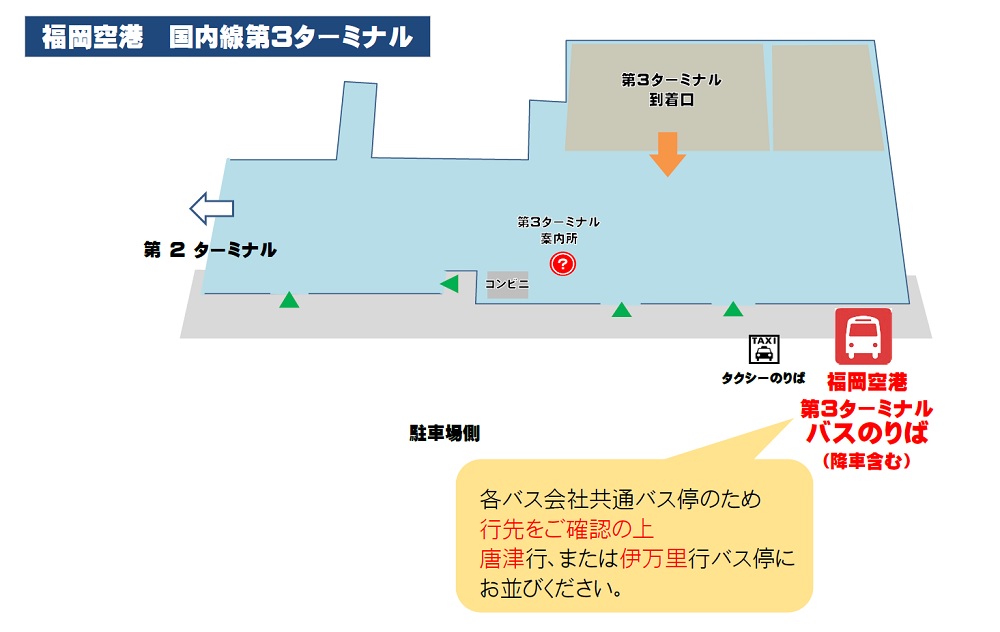 Next, we will explain how to get to Karatsu from Tenjin Fukuoka train statin. You can purchase a ticket using the ticket machine at the Tenjin subway station. The ticket machines are available for use in Japanese, English, and Chinese. A one-way ticket to Karatsu costs 1,140yen. 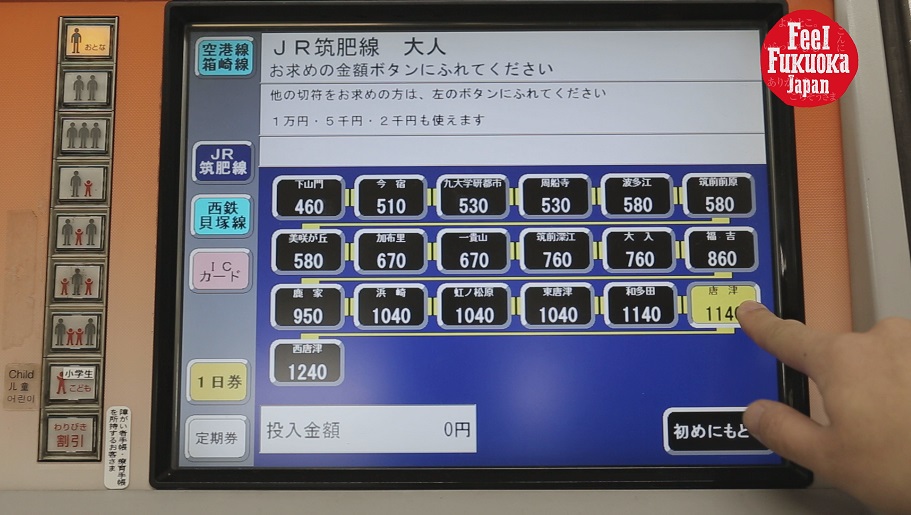 【How to buy tickets】
1. Select the number of tickets you want to purchase.
2. Select the JR Chikuhi Line (JR筑肥線).
3. Press the button labeled “Karatsu”(唐津).
4. Insert your money into the note slot and take your tickets.

The train to Karatsu will depart from platform 2. Please board the train labeled “Karatsu” or “Nishi-Karatsu” (西唐津) as its final destination. 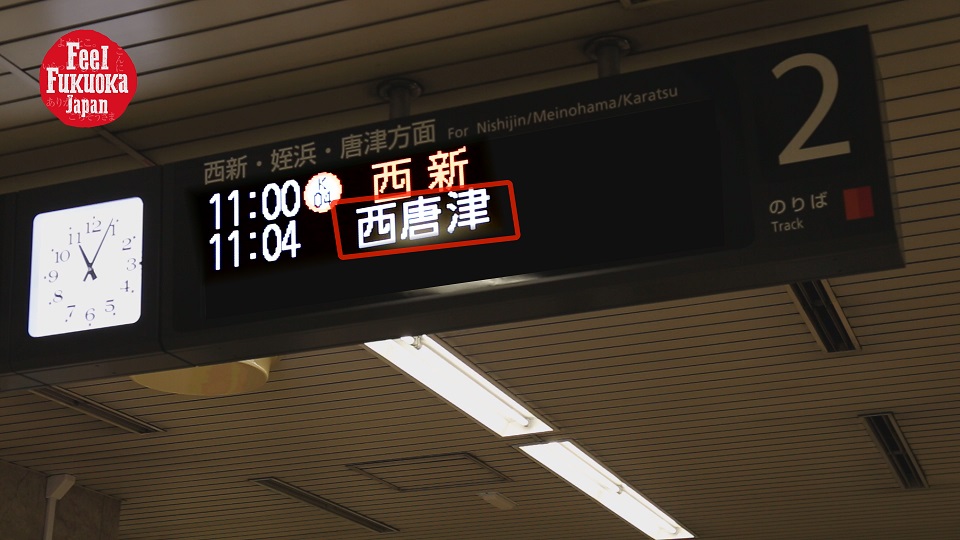 It will take 80 minutes for the train to reach Karatsu from Tenjin. You can also board the train from the Fukuoka International Airport at platform 2 to go to Karatsu. Please come and try it.

In Japan, there exist a festival called the “Karatsu Kunchi” (唐津くんち), it is a large festival held across 3 days on November 2nd, 3rd, and 4th.

The 14 Haikiyama (曳山) floats used in the festival’s parade are taken from the Hikiyama Exhibition Center. Come and watch the parade of the majestic Hikiyama floats if you have the chance. 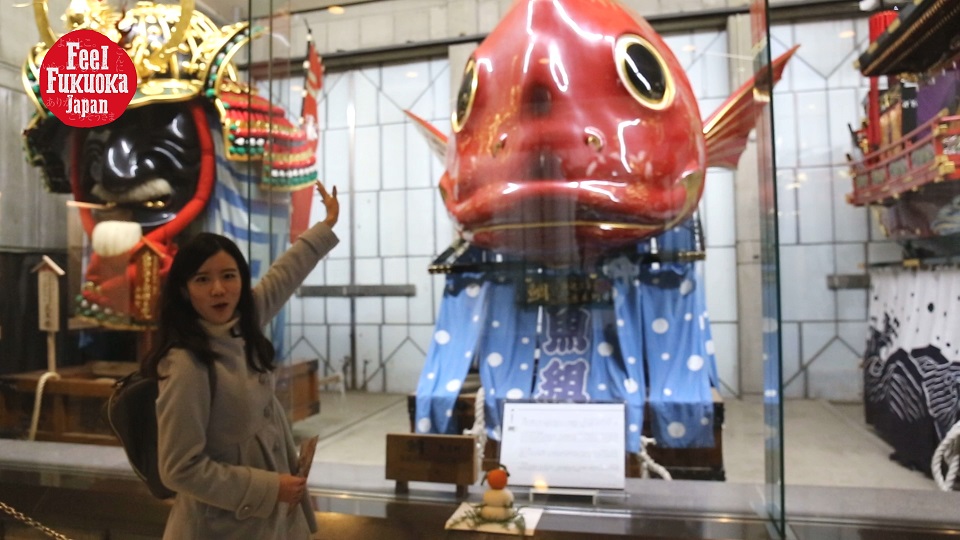 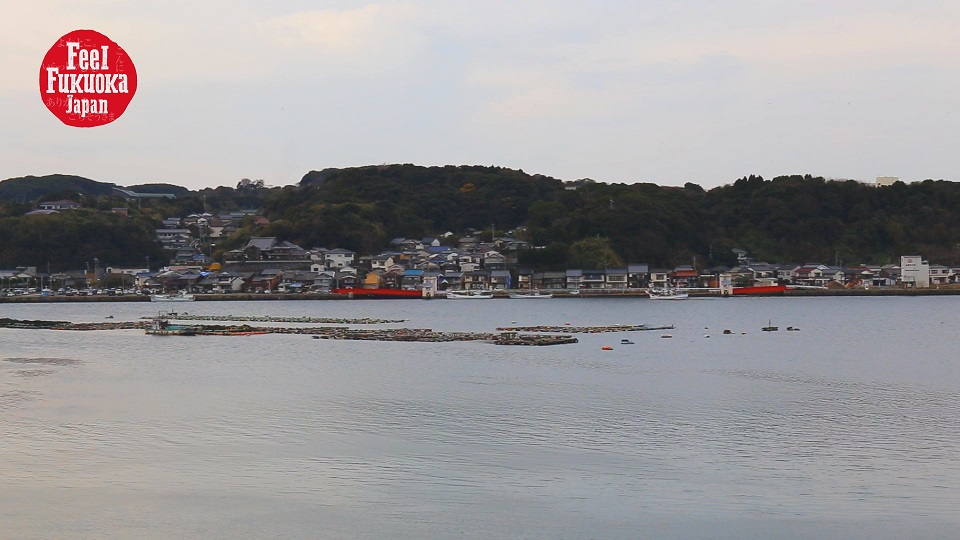 In the northern part of Karatsu, there exist a port town called “Yobuko” (呼子). It is a port city popular for its fishing industry and its freshest ingredients from the sea. One of the popular ingredients, is the squid. 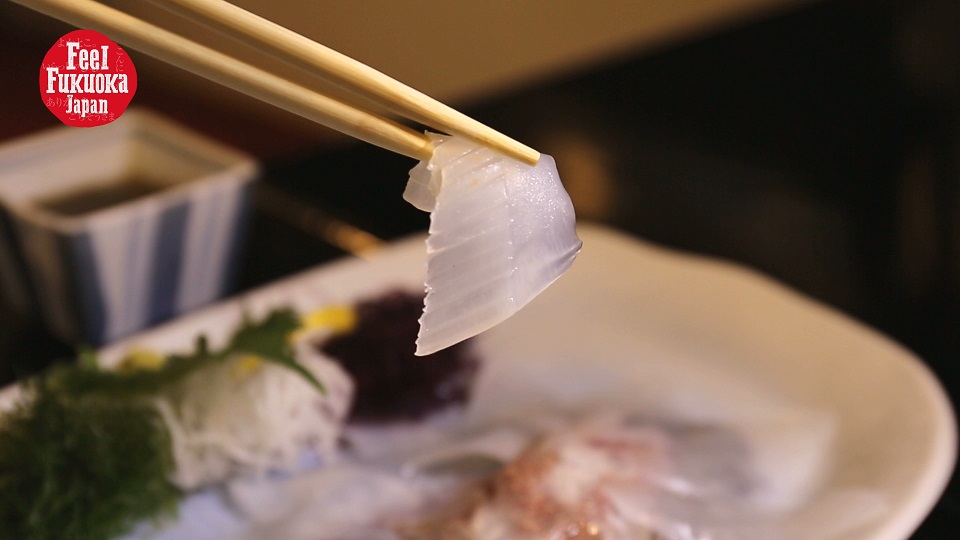 Today, we are visiting the floating restaurant that serve these squid as part of its menu, the “Manbou” (萬坊). Here, you can enjoy the performances on the stage while enjoying the squid sashimi served while the squid is still alive. 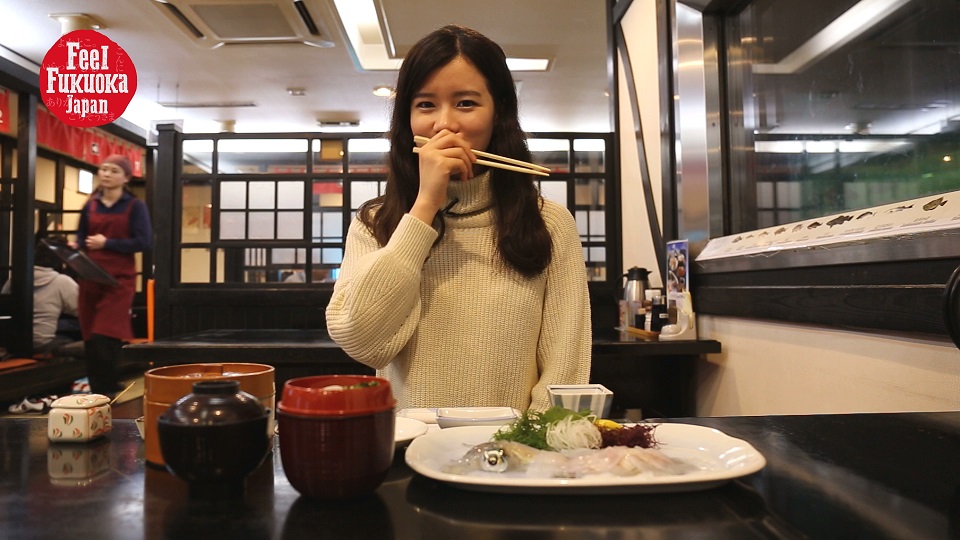 Aside from the sashimi, we also recommend the restaurant’s dumplings and tempura. 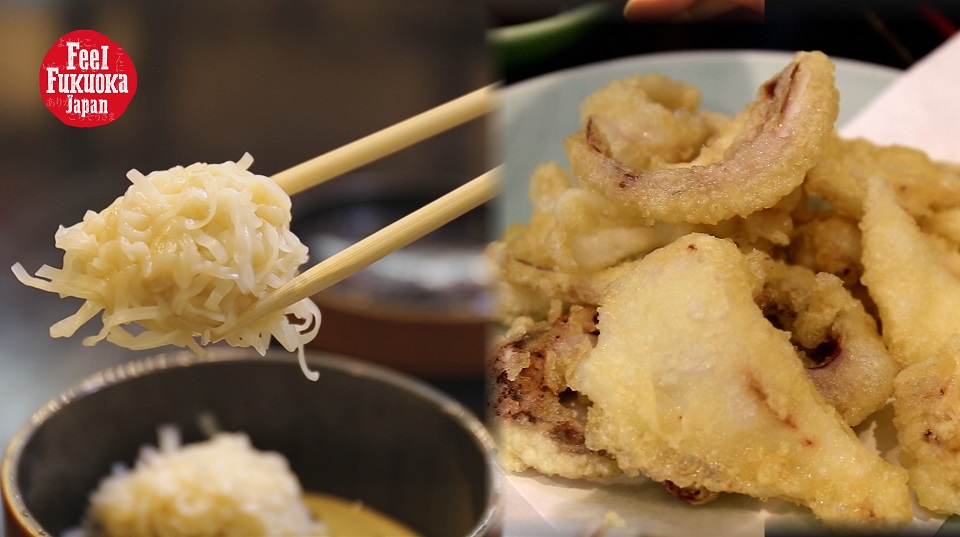 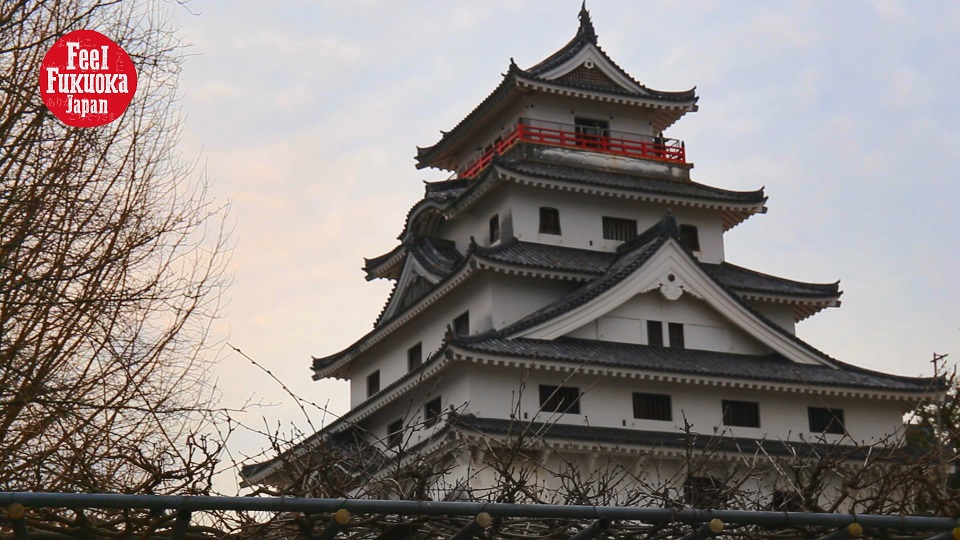 Whichever season you decided to come, this spectacular view will be here waiting for you. 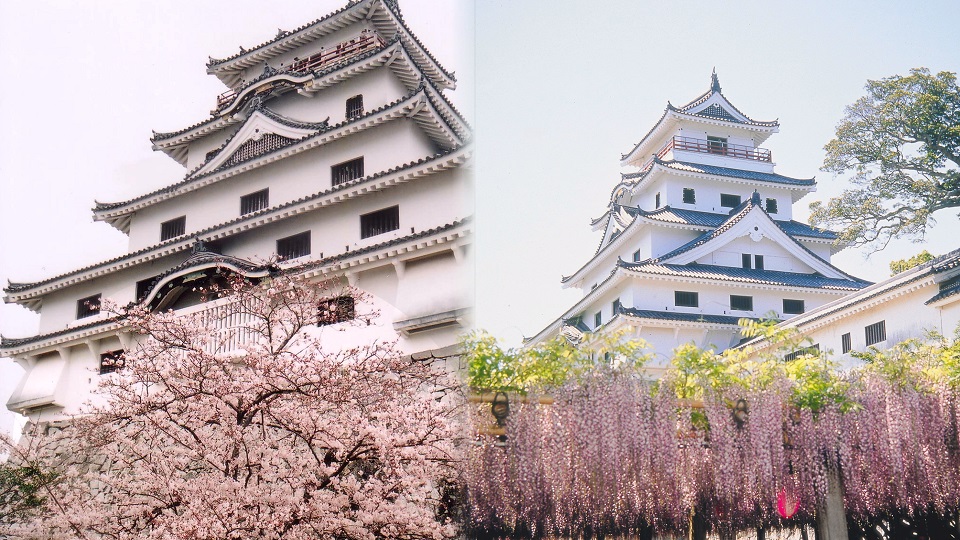 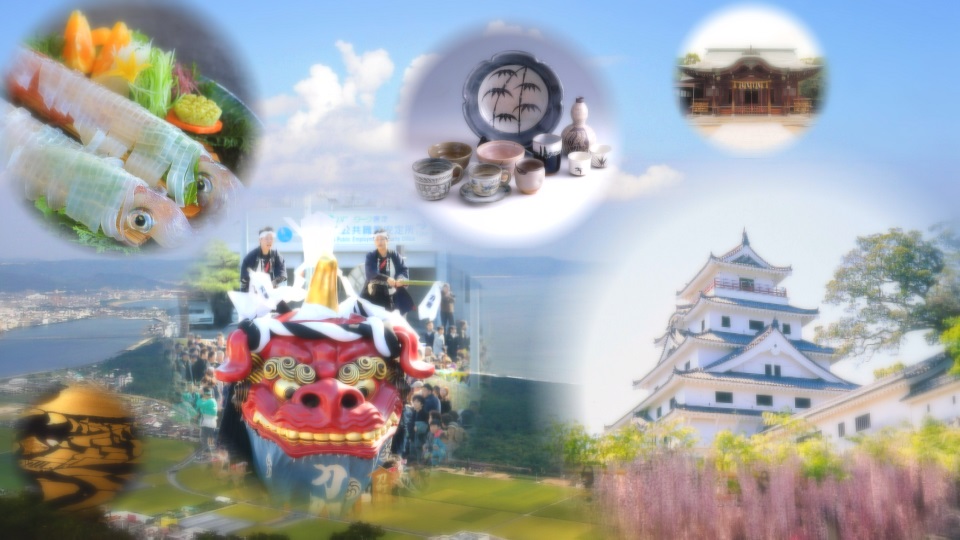 Karatsu is a city right next to Fukuoka city, therefore it is easy for anyone to come over and have some fun at Karatsu. If you want to find out more about the glamor of the city of Karatsu, then please refer to the following website.

AEON MALL – A place for the whole family

Have you heard of the famous AEON MALL? Not only perfect for shopping, this plac... 続きを読む