Tsukimi (月見) or Otsukimi (お月見), literally moon-viewing, also known as Jugoya (十五夜), refers to Japanese festivals honoring the autumn moon, a version of the Mid-Autumn Festival. The celebration of the full moon typically takes place on the 15th day of the eighth month of the traditional Japanese calendar; the waxing moon is celebrated on the 13th day of the ninth month. These days normally fall in September and October of the modern solar calendar.Tsukimi traditions include displaying decorations made from Japanese pampas grass (susuki) and eating rice dumplings called Tsukimi dango in order to celebrate the beauty of the moon. Seasonal produce are also displayed as offerings to the moon. Sweet potatoes are offered to the full moon, while beans or chestnuts are offered to the waxing moon the following month. 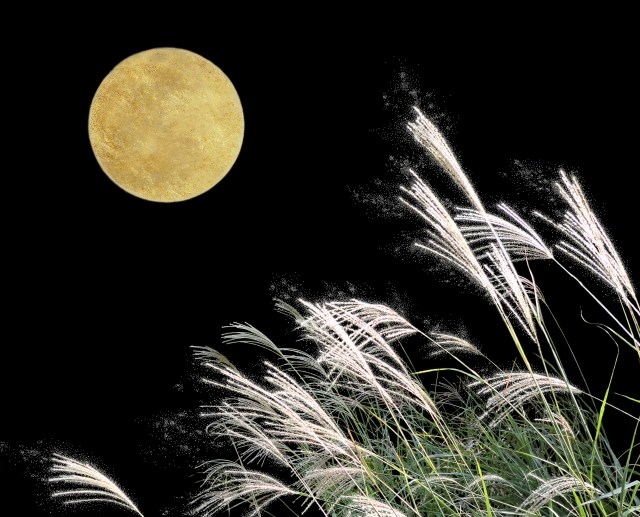 Festivals dedicated to the moon have a long history in Japan. During the Heian period elements of the Chinese Mid-Autumn Festival were introduced to Japan. The custom is thought to have originated with Japanese aristocrats during the Heian period, who would gather to recite poetry under the full moon of the eighth month of the solar calendar, known as the “Mid-Autumn Moon.” Members of the aristocratic class would hold moon-viewing events aboard boats in order to view the moon’s reflection on the surface of the water. 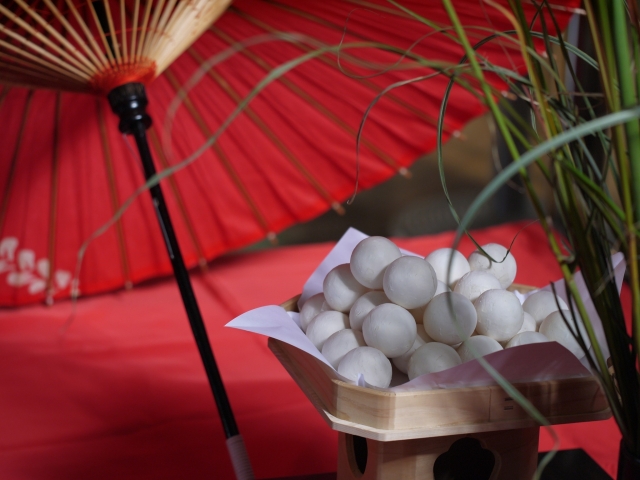 Since ancient times, the Japanese have described the eighth solar month as the best time for looking at the moon, since the relative positions of the earth, sun, and moon cause the moon to appear especially bright. On the evening of the full moon, it is traditional to gather in a place where the moon can be seen clearly, decorate the scene with Japanese pampas grass, and to serve white rice dumplings (known as Tsukimi dango), taro, Edamame (soy beans), chestnuts and other seasonal foods, plus the traditional rice wine Sake as offerings to the moon in order to pray for an abundant harvest. These dishes are known collectively as Tsukimi dishes. 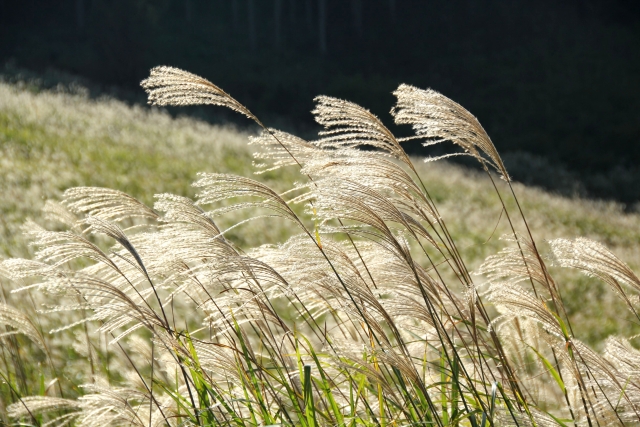 What Foods are Enjoyed During Tsukimi?

The most traditional food associated with Tsukimi are known as tsukimi dango, or small white dumplings made of rice.
However, unlike other rice dumplings which tend to be served skewered and seasoned with a sweet and savory sauce similar to teriyaki, tsukimi dango are plain, and stacked into a beautiful arrangement on a tray. Tsukimi dango are typically displayed in an alter to represent an offering to the moon.

Other foods which are associated with Tsukimi include chestnuts, known as “kuri” in Japanese, and taro, known as “sato imo”, in Japanese, as well as Japanese pumpkin.
Here is a bit of trivia regarding the Japanese term “tsukimi”. It is also used in Japanese cuisine to refer to specific foods that highlight raw egg or an over easy egg, because the cracked egg resembles the full moon. For example, tsukimi soba (thin buckwheat noodles) and tsukimi udon (thick wheat noodles) are traditional Japanese hot noodle dishes in broth, topped with an egg. While these dishes are not considered traditional Japanese food for moon viewing or the Harvest Moon Festival.

A special mochitsuki New Year event is going to be held in front of Hakatamachiy... 続きを読む