Some shrines in the city of Fukuoka issue mask-shaped amulets so small that they fit in the palm of your hand. The masks have a deep-rooted history and have long been cherished the local population.

While the masks themselves display what outwardly may appear to be a bad-humored expression, many locals nevertheless flock to the shrines to get their hands on one of these local talismans. Now we’d like to share with you a couple of the talismans which local Fukuoka residents often use to decorate and protect their homes.

When you first visit the city of Fukuoka, take a walk around the city and you might notice a monkey mask on display outside people’s front doors and gates. 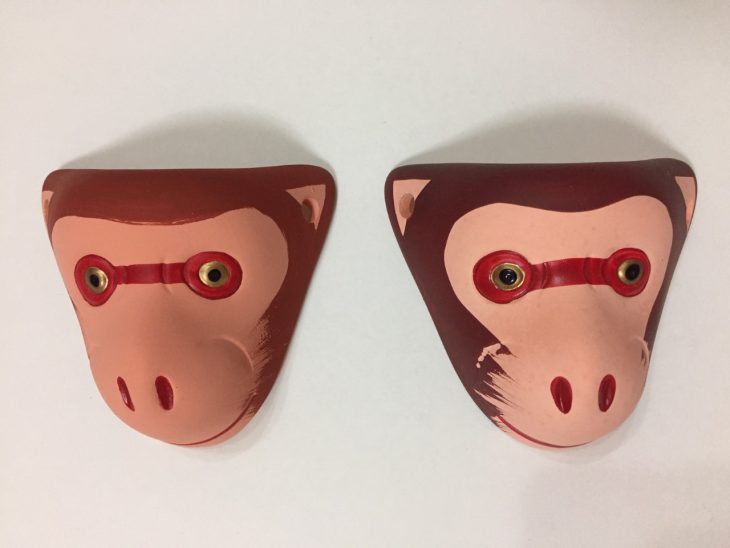 This monkey mask is only available some six or seven times a year from a small shrine known as Sarutahiko Shrine, located just moments from the Fukuoka City Subway Fujisaki Station. Sarutahiko is known as the god of guidance and travel and while these monkey masks are derived from the god’s name, as it contains the Japanese word for “monkey” (saru, 猿), there is another Japanese word pronounced exactly the same which means “to leave” or “to go away” (saru, 去る). It is for this reason that people in Fukuoka began to decorate the entrance to their homes with these monkey masks in order to drive away misfortune; in other words, to make the bad “go away” (saru). During festivals when these monkey masks are available for purchase many people will line up before the crack of dawn just to get their hands on one of these unique little amulets. Some people have even waited in line for as long as three hours!

Kappa are mythical Japanese creatures said to live on the edge of bodies of water such as rivers and marshes, but legend has it that there was a kappa known as the sakenomi kappa which lived in the sea of Fukuoka City’s Jigyohama neighborhood. 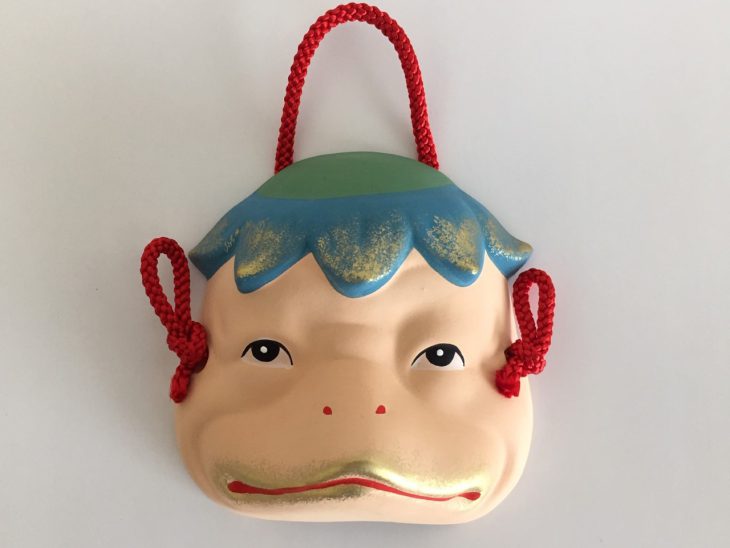 According to legend, one of the gods was once carrying out a purification ritual on the seaside when the waves began to grow too rough to go on. This is when the kappa appeared and showed the god the way to calmer waters.

The god in this story is none other than the great Izanagi, held to be the creator of the Japanese archipelago. It is said that Izanagi continued to perform the purification ritual in the calm waters and that many other Japanese gods were then born from the drops of water. The kappa thus came to be revered by the people, who would later make masks which would be used to adorn their homes and pray for protection from the gods.

It is said that the kappa mask will bring a different kind of fortune depending on where it is displayed. For example, Meinohama Sumiyoshi Shrine sustained significant damages during an earthquake which once struck the city of Fukuoka. Apparently, the head priest of the shrine appeared on a quiz show on TV, winning 10 million yen in prize money which he then used to repair the shrine.

Although it is often said that the Japanese as a people are not religious, many Japanese people nevertheless believe in the existence of the gods. In Japan, all the gods are said to accept and acknowledge one another’s existence, and thus have no need to differentiate, discriminate or criticize one another. It is a commonly held belief in Japan that there are a multitude of gods who are present with us everywhere and at all times, although we may not always be consciously thinking about them.

Because it is taken for granted that the gods are with us at all times no matter where we go, most Japanese people only really tend to think about the gods at very specific times, such as at the beginning of each new year for the New Year’s holidays or other special occasions.

Check out these easily accessible shrines in downtown Fukuoka

Fukuoka – One Station, One Neighborhood: Tenjin

Fukuoka - One Station, One Neighborhood: Tenjin