If Fukuoka City were royal jewels, then Tenjin would be the crown. Bedecked in shimmering lights and for many the very heart of Fukuoka, you would be hard-pressed to live or even travel in Fukuoka without becoming involved in this city’s grand nexus.

Tenjin can be loosely defined as being encompassed by the KBC Cinema to the north, Watanabe-doori and the Loft store to the south, Akasaka district to the west and the river to the east. The main focus of Tenjin is the broad tree-lined avenue that runs through the center from north to south like an artery (with the rather unromantic name of Prefectural Highway 602). While the road is often thronged with traffic the pavements are wide enough that it rarely feels crowded or hectic, the trees with their high canopies offering another barrier to the mass of buses and tax that pass along the avenue. As you might expect, Tenjin is the best-connected part of the city. All three subways lines and countless bus routes pass through, some taking you as far off as Kyushu University’s campus in distant Itoshima as well as the parts of the city the subway can’t quite reach (such as the Yahoo-Oku Dome baseball arena and Fukuoka Tower). But let’s stay in Tenjin proper for now and look around. 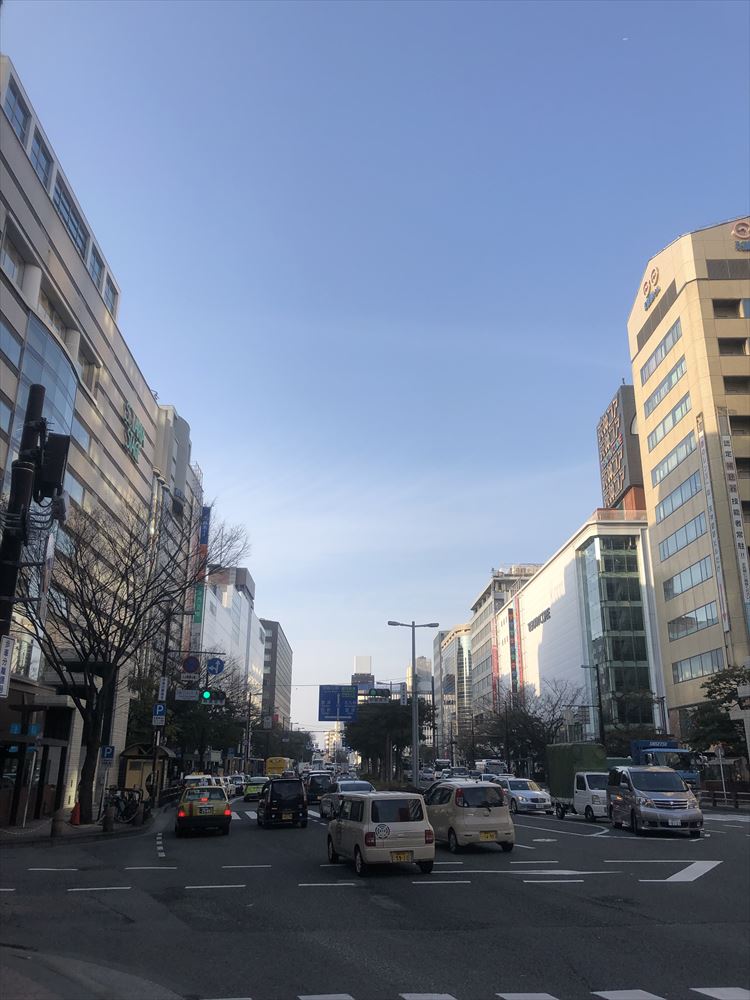 If you are standing on the west side of the main road, you may notice that the vast glass edifice of Mitsukoshi department store and the Nishitesu Tenjin terminus are punctuated here and there by walkways to the other side. Here lies Kego Park. Its amphitheater-like semicircle of low stone seating is often hosted to denizens of the city meeting and chatting in the half-light, away from the hustle and neon glare of the main road. On many evenings you may find buskers to entertain your ears and in front of Solaria Stage is the glass studio of Love FM. You may expect a small crowd around there if the station is interviewing a famous singer, for example, trying to get a close-up look. The park is bordered on the other side by the namesake Kego Shrine. It is a small oasis of photogenic calm, giving the downtown visitor opportunities to experience a Japanese shrine between shopping. Nishi-doori on the western side of Tenjin is the street home to several brand stores including H&M, Apple, Brooks Brothers, Zara and Forever 21. 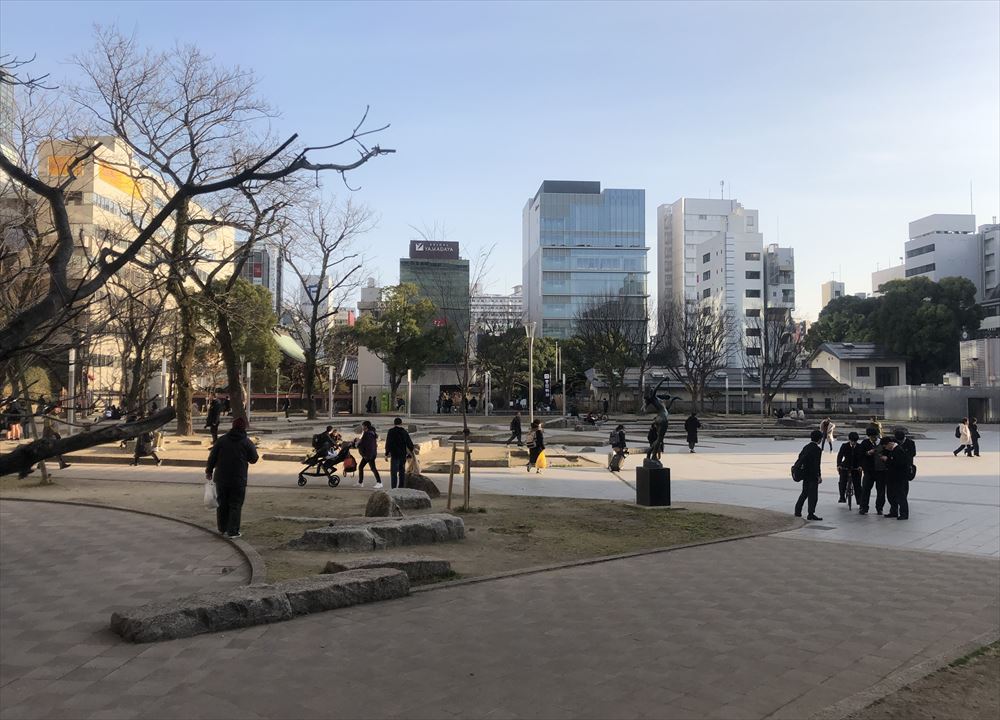 Being downtown, the main focus of Tenjin is indeed its shopping. Foremost are a trio of department stores: Parco, Mitsukoshi and Daimaru. Lion Hiroba is a covered square outside one of Mitsukoshi’s many entrances and hosts the Fukuoka City Tourist Information Center. Here you will also see how Lion Hiroba got its name. As with the main Mitsukoshi store in Tokyo’s Nihonbashi, this entrance is guarded by two bronze lions. These are exact scale replicas of the lions in London’s Trafalgar Square. You are advised not to try and ride them but they might appreciate a friendly pat. 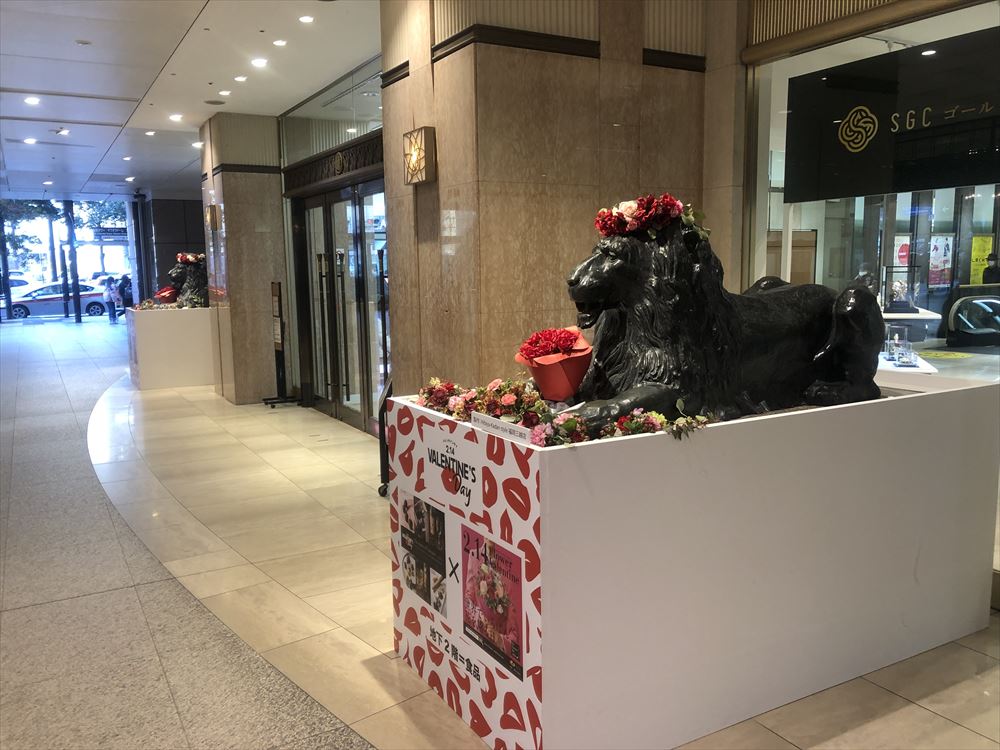 Compared to the luxury of Daimaru and Mitsukoshi, Parco has a little more in common with Tenjin Core across the road, having stores for fashions for young people. But each department store has a generous food court in the basement, including imported food and drink if you are missing home.

Were you to exit Mitsukoshi from the lowest floor in the basement, you would find another London influence in a small branch of Fortnum & Mason. Keep walking, however, and will emerge in the Tenjin Chikagai. This subterranean street runs directly underneath the street above. Calmly lit and with a low ornate iron-wrought ceiling, this may provide another respite from the street above (although the Chikagai can get busy!). Two long aisles of shops, cafes and restaurants provide ample distraction as you head to Tenjin Subway station. Here and there are also stained glass and mosaic images, dotted behind corners and along narrower corridors. These add to the overlaying serenity of the Chikagai as the tide of the city shoppers swells around you. 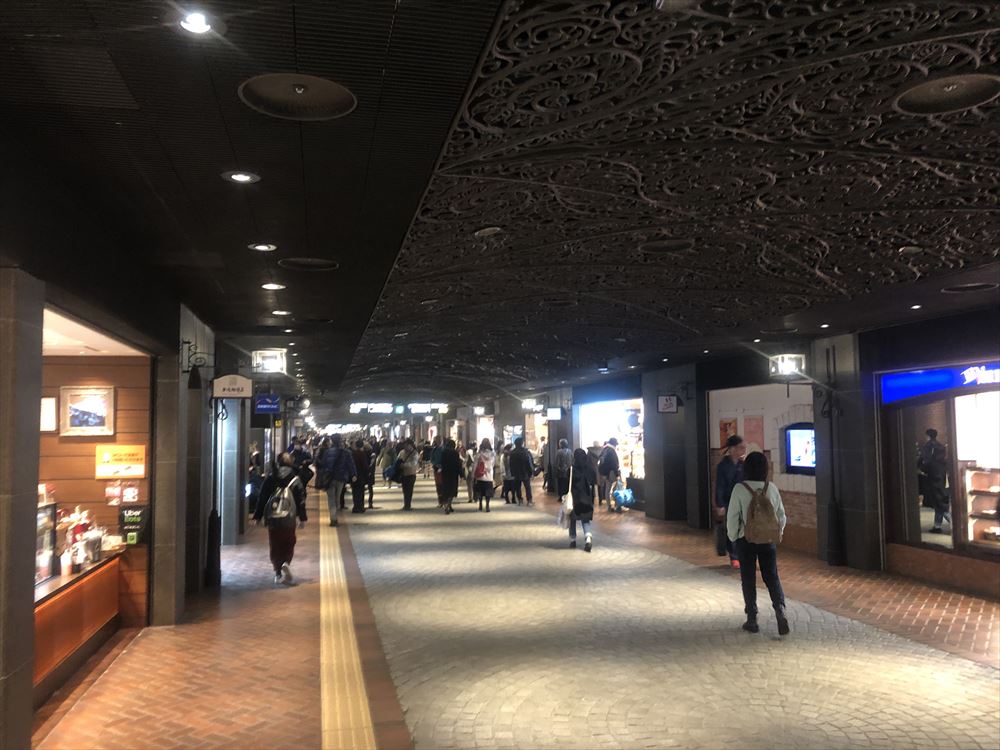 If, like me, you are not a very keen shopper then you might wonder if there is anything in Tenjin for you at all. I am pleased to say that there is. Were you to walk past Tenjin Core, leaving the main road behind you, very soon your weary soul would be greeted by Tenjin Central Park. This charming square has a flat grassy area for strolling or sitting, as well as winding walkways around the perimeter. The riverside benches under the tree canopies are popular during blossom season. Near the old prefectural office is a large fountain, colonnaded and calm. The north side of the park is dominated by the back of Across Fukuoka. A large modernist concrete building, its stepped back clad in trees and bushes that rise in steps from bottom to top. You half expect the whole building to rise up on legs and trudge out to sea like a creation from Studio Ghibli. You can climb up this garden for free but make sure you have the energy for it first! A view across Fukuoka (no pun intended) will be your reward. 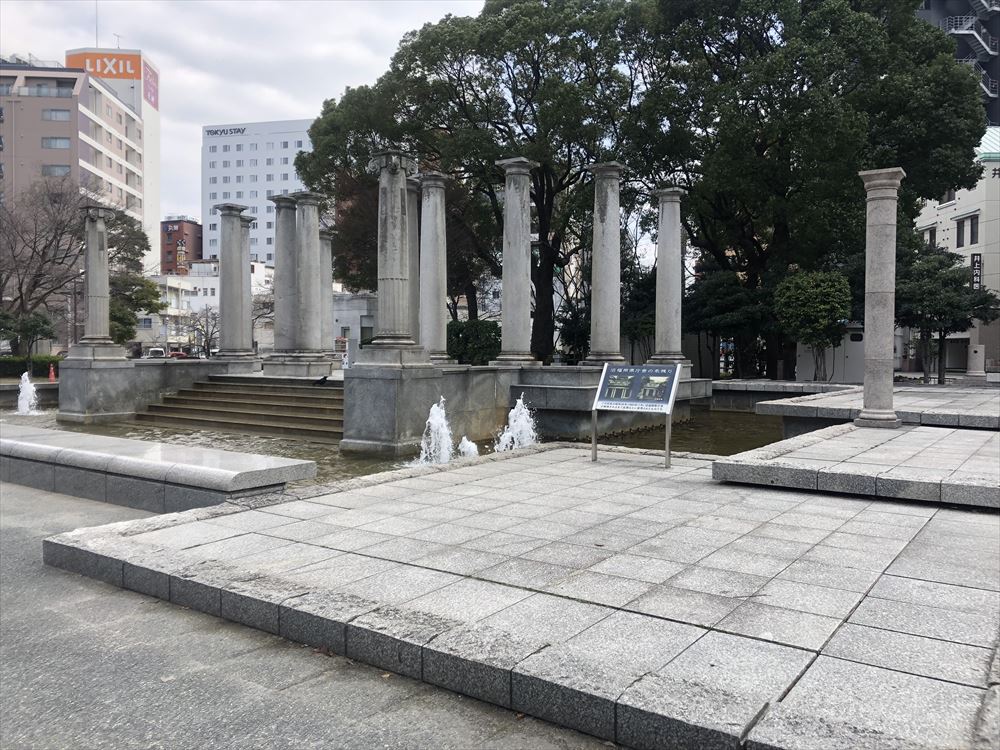 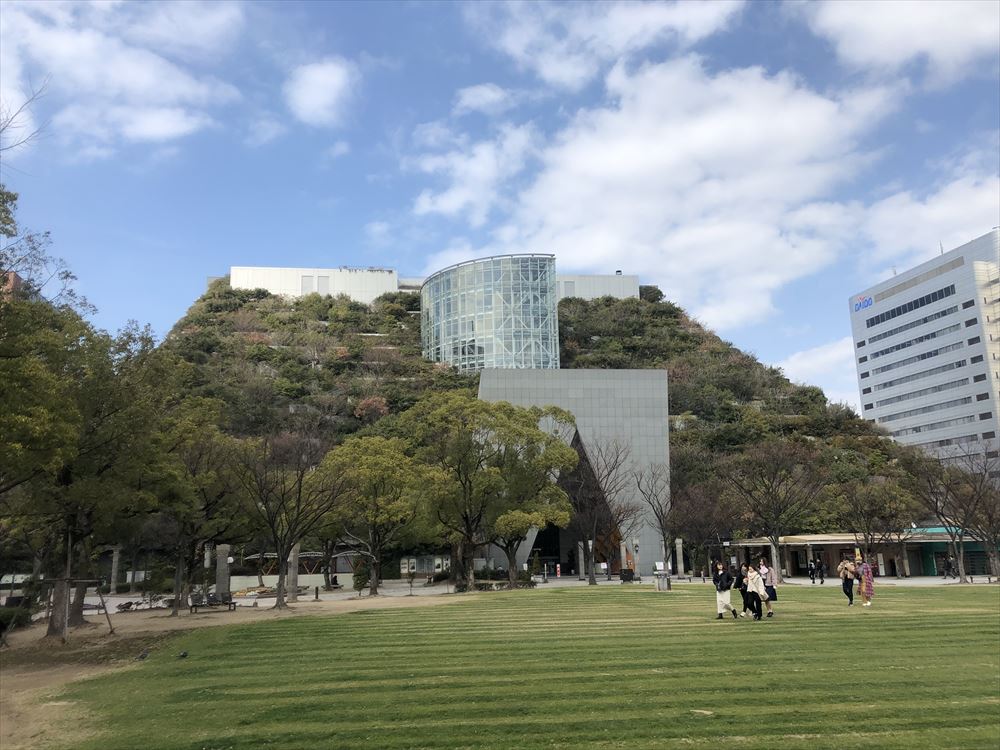 Tenjin’s last park is Suzaki Park. You will pass through this park on your way to the Fukuoka Prefectural Art Museum. Here is the uttermost corner of Tenjin. A cool sea breeze along the river will tell you that you’re no longer in the sheltered embrace of downtown. So let’s head back. 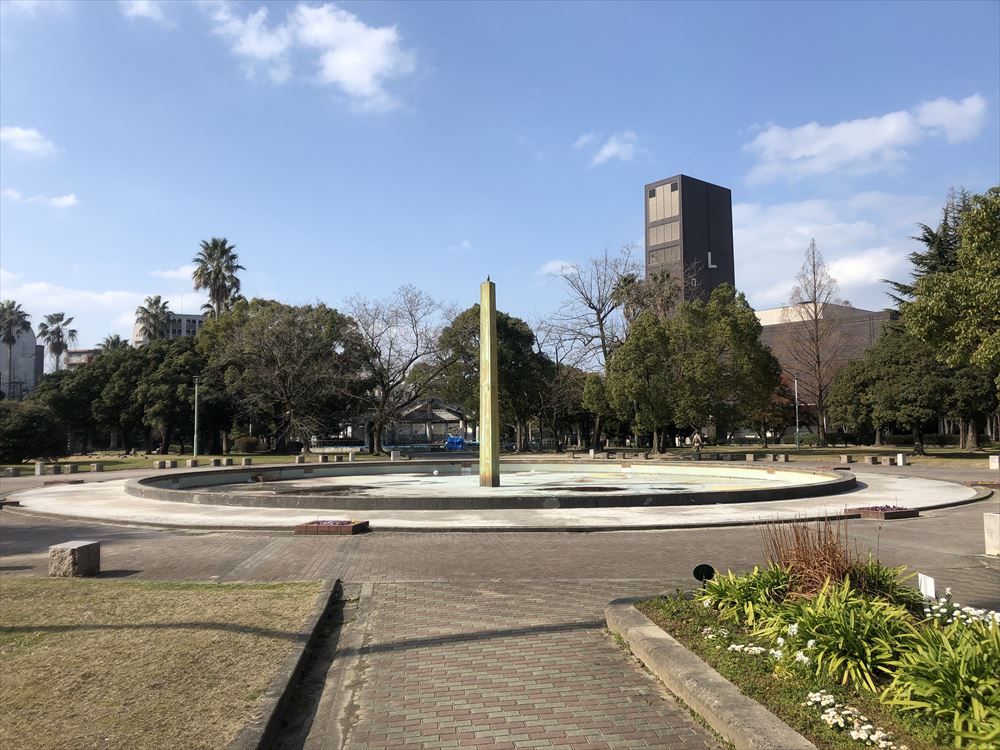 By now evening may have fallen and Tenjin is aglow and abuzz with nightlife. Do not miss this opportunity to partake in one of the many yatai – food stalls famous in Fukuoka. But these are not mere stand-up counters. Behind a tarpaulin canopy is a stocked and steaming kitchen, serving true Fukuoka food and drink to a horseshoe of modest tables of up to a dozen people. Such a unique and cozy culinary experience is not to be missed.

Let’s enjoy Water Front and Momochi Beach that represent Fukuoka to the fullest!

A compact city, Fukuoka has a very close access to a city and nature for which s... 続きを読む

Exploring Uto, Uki, and Misato ～Places that heals the heart in the prefecture of nature, culture, and history; Kumamoto City～

The “Uki Area” is located in the center of Kumamoto which consists of 3 cities: ... 続きを読む