The definitive guide to the many seasonal events taking place in Fukuoka throughout the year!

Japan is home to four distinct seasons as well as a number of festivals and events to enjoy all year round, and Fukuoka is certainly no exception. From the vibrant greenery and colors of the seasonal flowers in bloom, to the traditional festivals handed down for generations, to a number of sporting events and more, there is always something new to discover in Fukuoka no matter when you visit. So be sure to check out this guide to the many seasonal events held in Fukuoka each year and get ready to plan your next visit, whether you’re coming for the first time ever or coming back for more!

Among the best things to see in Fukuoka during the spring are without a doubt the cherry blossoms and the city’s famous Hakata Dontaku Minato Festival!

Late March through early April is the perfect season to enjoy hanami, an extraordinary experience where you can enjoy a picnic and a few drinks while gazing up at the lovely cherry blossoms in full bloom. Some of the city’s most famous cherry blossom viewing spots include Maizuru Park and Nishi Park, both located near the city center, as well as Nokonoshima where you can enjoy the marriage of both the cherry blossoms and rapeseed flowers in bloom. The article below covers some of the lesser-known cherry blossom-viewing spots found mainly in the outskirts of the city of Fukuoka, so be sure to check it out if you’re the kind of person who would prefer to enjoy the cherry blossoms at your own leisurely pace.

Each year in May the city holds its famous Hakata Dontaku Minato Festival, known as one of the city’s “big three” festivals. The festival is so famous that it is said to draw more than 2 million visitors each year. The festival’s roots date back to over 800 years ago with a festival known as Hakata Matsubayashi, and it is now best known for its parade where participants dressed in a variety of costumes tap a pair of rice paddles together as they march throughout the city streets. The festival’s grand finale consists of a dance where spectators are welcomed to join in and dance alongside the performers.

No guide to summer in Fukuoka would be complete without mentioning another of the city’s “big three” festivals, the Hakata Gion Yamakasa Festival. During the month of July the city streets are adorned with gorgeous decorative floats known as kazariyama standing at over 10 meters tall. At the climax of the festival a group of men clad in loincloths known as shimekomi (ceremonial fundoshi) literally race throughout the city carrying kakiyama, or massive floats which can weigh as much as one metric ton.

And in July through September Fukuoka holds a number of large-scale fireworks festivals where you can experience anywhere from a few thousand to ten thousand fireworks as they light up the sky. The suble majesty of the painstakingly crafted fireworks is sure to provide some needed respite from the summer heat. For those who have yet to experience fireworks in Japan, this is one grand spectacle you simply cannot miss! 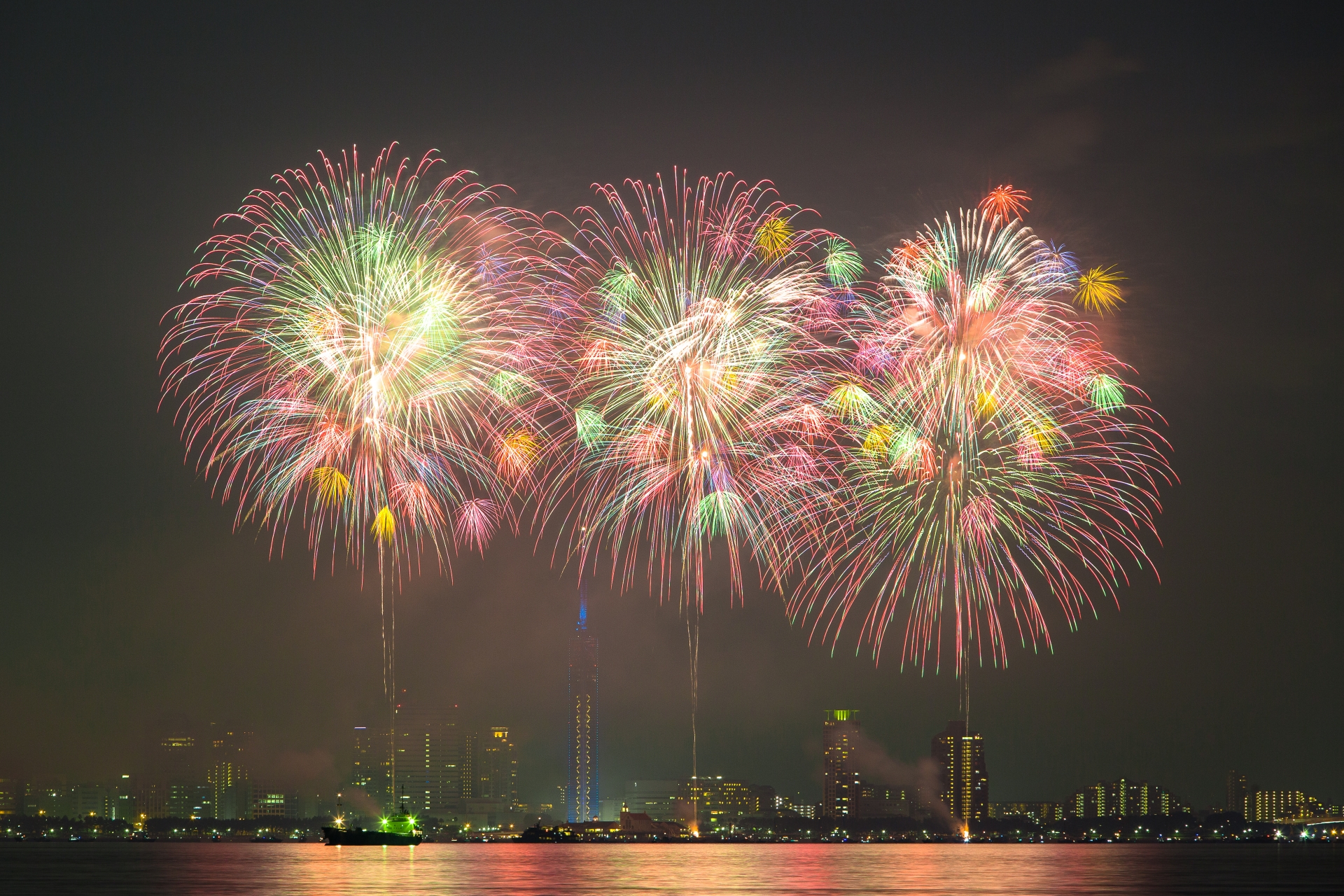 Autumn is the season for giving thanks for a plentiful harvest, and in September Fukuoka holds the third of its “big three” festivals: the Hojoya Festival. The festival is held to express our love and appreciation toward all living things, caution against needless killing, and to give thanks for the autumn harvest. As part of this festival you can experience an ancient Shinto ritual procession of omikoshi (portable shrines) which dates back over 1,000 years, and throughout the festival the path leading up to the shrine comes to life with some 500 street vendors and throngs of visitors who flock to the festival each and every day.

If nature is your thing, you can’t miss the cosmos flowers in bloom on Nokonoshima Island from early to mid-October.

And throughout the month of November you can enjoy the changing red and yellow hues of the autumn leaves. Among the most popular spots for enjoying the changing autumn leaves include Yusentei Park and Rakusuien Garden, but just as we mentioned when discussing cherry blossom viewing there are also plenty of lesser-known places on the outskirts of the city where you can enjoy viewing the autumn leaves at your own leisurely pace, so be sure to check out the following article to learn more.

Last but not least, we can’t forget the national sport of Japan: sumo! From mid- to late November Kyushu’s professional sumo tournament, the Kyushu Basho, takes place. Alongside the likes of Tokyo, Nagoya and Osaka, Fukuoka is one of few places in all of Japan where you can experience a honbasho, or official sumo tournament, some of the most famous and influential events in the world of sumo! 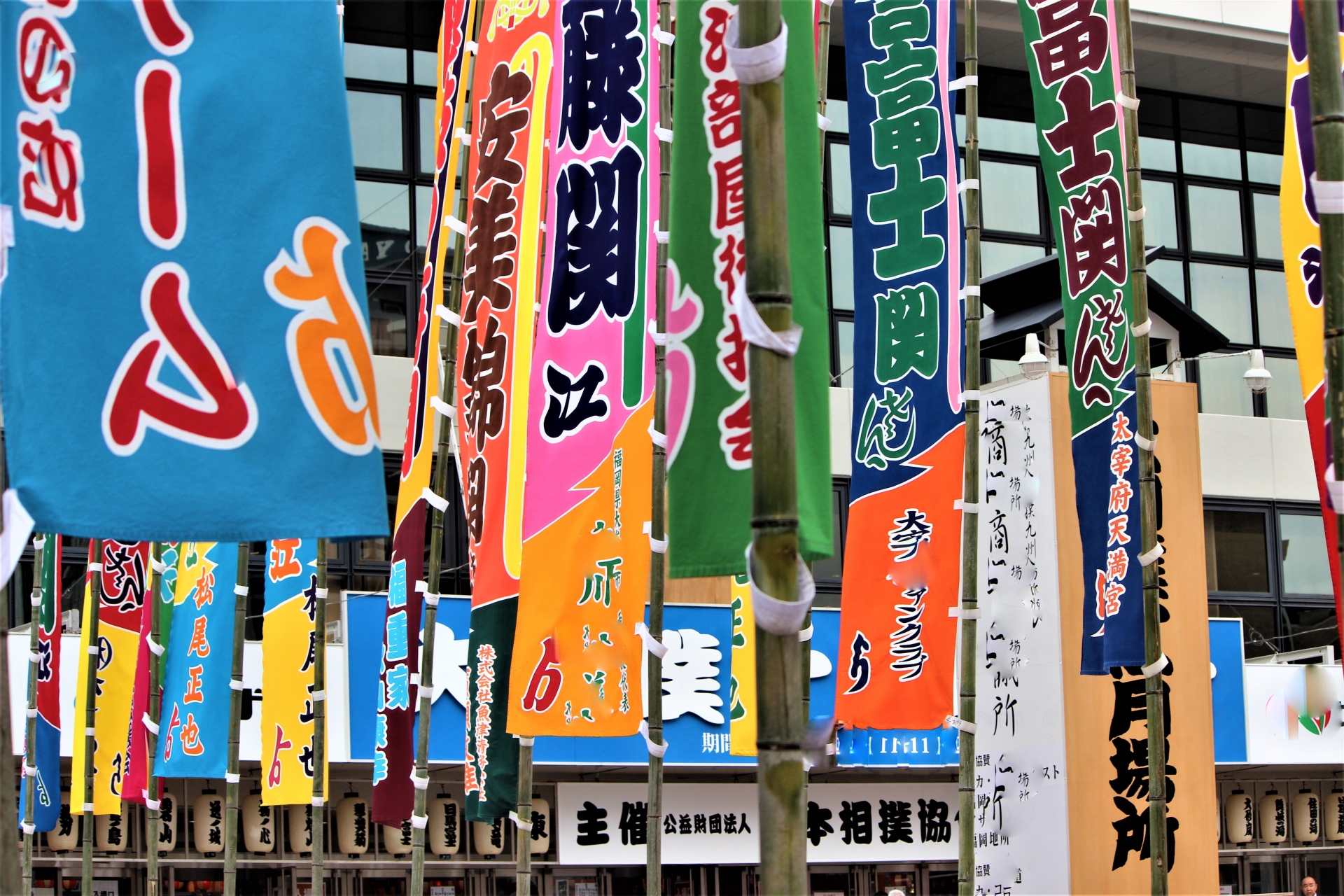 Nothing says December quite like Christmas! Visit the plaza in front of Hakata Station or the Tenjin area to see the brilliant Christmas light displays as they paint the city streets a gorgeous heartwarming color! Be sure to visit one of the city’s Christmas Markets as well, where you can enjoy a bite to eat and a drink to the backdrop of the beautiful atmosphere.

Just as the cheery year-end festivities come to a close, Japan quickly switches gears as it rings in the more sober traditions of the New Year’s season. At this time of year Shinto shrines and Buddhist temples throughout the country are packed with visitors in what could easily be described as the shrine or temple’s largest event of the year, hatsumode (the first shrine or temple visit of the year). Some of Fukuoka’s most traditional places to visit for hatsumode include Kushida Shrine, Sumiyoshi Shrine, and Hakozaki Shrine. The article below outlines some of the best places to go for hatsumode in the outskirts of the city, so be sure to check them out should you get the chance to visit Fukuoka during this special time of the year.

Camp Hakata – A Historic Shopping District Gets an Artistic Makeover

Journey to the Kingdom of Lights, back again this year at Huis Ten Bosch!